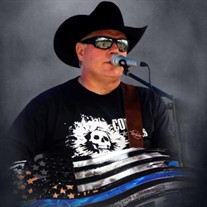 Scott L. Ford, 48, passed away on January 1, 2021. Scott was born the son of Marilynn and David Ford on April 28, 1972 in Kansas City, Kansas Scott was a graduate of Shawnee Mission West High School in 1990. Following High School, Scott went to Green Bay, Wisconsin where he studied Law Enforcement. He was a Deputy for Clay County Sheriff’s Department for 25 years. Scott loved his sports. He enjoyed playing soccer, basketball, golf, mountain bikes, motorcycles, swimming, hunting, Midwest Crawler group, Kansas City Northland Jeepers, Radio Free Texas, and dancing to name a few. Scott also went to Rodeo Clown School so he could be a Rodeo Clown in Missouri. He won three gold buckles during his 7 years as a clown. Many people know Scott had his own band where he wrote and recorded his songs. Scott was on the radio, Reverb Nation Station where he had several #1 hits. He loved to travel and share his music with his friends and family. He has traveled to Texas, Kansas, Missouri, Oklahoma and Colorado for his music. Scott volunteered everyday at Morning Glory Ministers in Kansas City, Missouri. He was a member of the Knights of Columbus and was involved in several clubs in the metro area. Scott never met a stranger. He was friendly to everyone. Scott had a wonderful sense of humor and smile that went on forever. His laughter would fill the air and it made you smile. If you were his friend, he was your friend forever. He’d love you like a brother. Scott is preceded in death by his grandparents, Dave and Evelyn Ford and Vernon and Wanda Sims; uncle, Jerry E. Sims; and cousin, P.J. Palmer. Scott is survived by his parents, David and Marilyn Ford, of Overland Park, KS; sisters, Christy Gantt, Springhill, KS and Stephanie Reynolds, Mason, Ohio; four nieces, Lauren Gantt, Aubree Gantt, Sydney Reynolds and Julia Reynolds; great nephew, Colton Gantt; aunt, Donna Ford Palmer, Bellevue, WA; cousins, Andrew (Carrie) Palmer, London, England, Glen (Katie) Palmer, Overland Park, KS, his faithful canine, Jackson; and many more relatives and friends. Donations may be made to Morning Glory Ministries or Union City Missions, 1112 Broadway Blvd., Kansas City, Missouri. Services will be live streamed on Facebook. Use the following link to access. https://fb.me/e/1PD4esG3q

The family of Scott L. Ford created this Life Tributes page to make it easy to share your memories.

Send flowers to the Ford family.