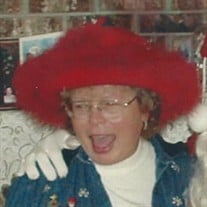 Shirley Ann Woods, the daughter of Cecil Paul Morelock, was born June 25, 1941 in Little Rock, Arkansas. The family moved to Kansas City, Kansas when she was two. She graduated from Wyandotte High School in 1959. She hated learning math and spoke of that often. Her favorite subject was reading, and once she learned she never quit. Shirley married Calvin Hayden Woods on October 8, 1960. Together they made a house a home, growing into a family of 7 with the addition of their five children. She dedicated her entire life to raising children, then helped to raise her grandchildren, and great grandchildren. While living in her Kansas City home, Shirley was usually found sitting by her pool or on her deck reading. She was rarely alone though because her kids and grandkids loved being there with her. The grandkids all share memories of pool time, eating drumsticks on the deck, and reading with Grandma during the Summer. The magic of Christmas lived within Shirley, and she made Christmas special every year pulling strings with Santa Claus for a special Christmas Eve visit. Shirley moved from Kansas City to Overbrook in 2006 where she lived the rest of her life. Living in the small town of Overbrook did not keep Shirley from her big city life. She regularly traveled three times a week to visit with her friends at the Big Q. There was rarely a trip to Kansas City that Shirley didn’t stop by the Argosy Casino. The penny machines were her favorite, and she had her methods that she believed brought her the most luck. She enjoyed passing those methods onto her kids and grandkids that would sit with her at the neighboring penny machine. Shirley loved to vacation. Her furthest travel was to Europe, where she traveled through England and Ireland with her bother in-law and sister, Dick and Mary Sylvis, and friend Sheila. She went back to Europe with a group of friends and visited France. She went to Florida annually for a weeks’ vacation spent with her sister. Disney World felt like a second home to her, and she shared her passion, and belief in Disney Magic with her children, grandchildren, and great-grandchildren through her trips with them. Another favorite vacation destination was Las Vegas. She not only loved Vegas for the penny machines, but also for the people watching that kept her busy when she was running low on luck. Missing her deeply, and cherishing so many fond memories are; her sister, Mary (Dick) Sylvis, her children; Michael (Chelle) Woods, Mark Woods, Jennifer (Jim) Lynn, Julie (Scott) Adams, and Matthew (Kendra) Woods. Her grandchildren who will never forget the love she showered them with; Joshua (Rachel) Woods, James Lynn, Jeremy (Molly) Woods, Desiree Woods, Amanda (Eric) Lawrence, Clinton Schiller, Joshua Woods, Mallory (Jacob) Jolly, Paris (Carol) Adams, Chelsa Adams, Breanna Adams, Elise Woods, Rickey Adams, Matthew Nelson, Dakota Vaughn, Olivia Adams, and Charlotte Woods. Her great grandchildren who will never forget getting the best of Shirley; Aaliyah Morris, Jaina Woods, Austin Thompson, Preston Lawrence, Juliet Woods, Arianna Thompson, Andi Morris, Aiden Thompson, Aeric Sutton, Hayden Jolly, Abel Sutton, Maelyn Jolly, and Emmett Jolly. Standing at the gates of Heaven welcoming her home was her husband Calvin Woods. Also welcoming her to heaven were her father, Cecil Morelock, siblings; Jim Morelock, Charlie Morelock, and Paul Morelock, and many other friends. There will be a visitation Friday, September 3, 2021 from 1 - 2 PM at Maple Hill Funeral Home with a funeral service to fallow at 2 PM. Burial will be at Maple Hill Cemetery. In lieu of flowers the family has asked for memorial contributions to be made to Children's Mercy Hospital https://support.childrensmercy.org/give/280980/#!/donation/checkout?c_src=vanURL.

Shirley Ann Woods, the daughter of Cecil Paul Morelock, was born June 25, 1941 in Little Rock, Arkansas. The family moved to Kansas City, Kansas when she was two. She graduated from Wyandotte High School in 1959. She hated learning math and... View Obituary & Service Information

The family of Shirley Ann Woods created this Life Tributes page to make it easy to share your memories.

Send flowers to the Woods family.