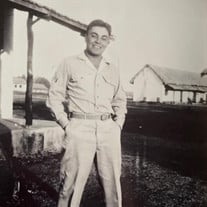 Solomen Mosquada Rangel, 99, of Kansas City, Kansas passed away May 31, 2022, at the Kansas City Veterans Hospital in Kansas City, Missouri surrounded by family. He was born March 13, 1923, in Turner, Kansas to Antonio and Conception Rangel, Solomen was part of the “Greatest Generation”. Solomen was raised in Turner, Kansas, and attended Turner Grade and Middle School, where he was recognized as a basketball star. Because of his father’s passing, Solomen left school after the 8th grade at the age of fourteen to work and support his family. He worked by his mother’s side in the Nebraska radish fields, providing food and comfort for his family during those turbulent times. He followed in his father’s footsteps and was employed at the Santa Fe Railway as a Car Icer, where he helped load ice for the refrigeration cars. On February 22, 1943, Solomen was called upon to serve and defend his country and was enlisted with the 771st Chemical Department in the China India Burma Theater as a toxic gas handler during WWII. He served in India and was required to stay in active duty two months after the end of World War II, due to his significant responsibilities. Solomen rose to the rank of sergeant Tech 4 during his three-year tour, during which he traveled the world. Solomen once quoted, “I was in Brazil, Africa, Saudi Arabia, India, and I climbed the Himalayas. By the time that my service ended in the military, I had crossed the globe either by airplane or by ship.” He was awarded the following medals: the American Service Medal, Asiatic - Pacific Campaign Medal, European - African - Middle Eastern Campaign Medal, WWII Victory Medal, and the Good Conduct Medal. Solomen received his Army Honorable Discharge on March 14, 1946. Solomen remained a proud Veteran in the Argentine community, often spending his time recognizing other Veterans, and encouraging others to do the same. He returned to his railroad career only to battle discrimination not only at the railroad, but at local diners, theaters, and places of worship. As a result, he would help form one of the first Rail Carmen Unions alongside his Hispanic and African American colleagues. The notable feat took years to accomplish and paved the way for other diverse workers to receive fair treatment and equal opportunities. Solomen retired from the Santa Fe Railway as a Rail Car Inspector after 45 faithful years of service. The 213 American Legion in Argentine, Kansas was formed with the help of Solomen and other returning Veterans following their struggles with discrimination and segregation. They sought to create a space where other Mexican American Veterans could form a supportive and welcoming community. Solomen was one of the original founding Charter Members of the Post 213 (The Eagles Nest) that proudly exists today. He held multiple positions, including Post Commander and Entertainment Coordinator. He organized many dances with Tex-Mex bands and was one of the first to introduce Tex-Mex music to the Argentine community. Solomen met the love of his life, Elvira Nuñez, on a blind date. The two wed on April 16, 1955, at St. John the Divine Catholic Church. As entrepreneurs, the couple entered the rental business and provided equal housing opportunities, with the goal of uplifting diverse communities. Solomen frequently traveled nationally and globally with his wife, racking up marvelous stories he’d later relay to his children and grandchildren, who will miss him and his precious stories dearly. Solomen was a generous donor to many organizations within Kansas and across the nation. St. Jude’s Children’s Hospital and the Lakota Indian Reservation were two out of the many organizations he supported for years. Solomen Mosquada Rangel was a true Veteran that loved and respected his country. He is preceded in death by his parents, Antonio and Conception Rangel, brothers, Antonio and Genaro Rangel, and his sisters, Esperanza Amayo and Delores (Lola) Vargas. He is survived by his brother Joseph Rangel, his wife of 67 years, Elvira (Nuñez) Rangel, three children: sons, Alfred M. (Maria), Richard G., and daughter Lisa M. Hernandez, 11 grandchildren: Bryan, Justin, and Kevin (Valerie) Rangel, Esteban, Ana, Maria, and Antonio Hernandez, and Alfred Jr., Christina, Michael and Gabriel Rangel, as well as 2 great-grandchildren: Scarlett and Ruby Rangel. He leaves behind many nieces, nephews, great nieces and nephews, as well as great-great nieces and nephew. Solomen also leaves behind his beloved cat, Oreo, as his beloved dog, Chiquita. Service will be held from 5:00-7:30PM Thursday, June 9, at the Maple Hill Funeral Home, 3300 Shawnee Dr., Kansas City, KS. Mass of Christian Burial will be held at 11:00AM Friday, June 10, at St. John the Evangelist Catholic Church, 2910 Strong Ave., Kansas City, KS. Burial will follow at the Mt. Calvary Cemetery, Kansas City, KS. In lieu of flowers, please consider making a donation to St. Mary’s Food Kitchen in care of Our Lady of Unity Catholic Church, 2646 South 34th St. Kansas City, KS, 66106. Or, at the American Legion Post 213 Scholarship Foundation, Mailing Address: 1044 South 26th St., Kansas City, KS, 66106. The family wants to express their sincere thank you to all the doctors, nurses and staff at the Kansas City Veterans Hospital in Kansas City, MO for guiding, treating, and supporting Solomen throughout the years. Your professional care during his time as a patient is highly appreciated and respected. The family is asking for people to wear masks for the visitation and for the funeral (optional).

Solomen Mosquada Rangel, 99, of Kansas City, Kansas passed away May 31, 2022, at the Kansas City Veterans Hospital in Kansas City, Missouri surrounded by family. He was born March 13, 1923, in Turner, Kansas to Antonio and Conception Rangel,... View Obituary & Service Information

The family of Solomen Mosquada Rangel created this Life Tributes page to make it easy to share your memories.

Send flowers to the Rangel family.