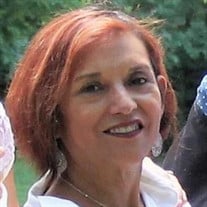 Teresa "Ms Terry" Coffman, a loving wife, mother, grandmother, teacher and lifelong resident of Kansas City Kansas, died unexpectedly on April 10th, 2020 at the age of 62. Terry is survived by her husband; Mark Coffman; her children, Elias Coffman, Rebecca (Gruver) and Zachary Coffman, Jennifer (Beier); and her grandchildren; Oliver, Cora, and Isaiah; her sister, Delores Segura. She is predeceased by her mother Mary Segura; father Robert Segura; her brother, Robert Segura; her granddaughter, Adelyn Coffman. Terry was born in Kansas City, KS on January 28th, 1958 to Mary and Robert Segura. She graduated from J.C. Harmon high school in 1976. That same year, she married Mark, her high school sweetheart. On November 6th, 1982 and July 2nd, 1987 respectively, she welcomed her two sons, who were the most important part of her life. Terry was a devoted mother and wife. She enjoyed singing and dancing in the kitchen, teaching preschoolers how to be creative and use their minds to the fullest. She would often be found in her garden pulling weeds and tending to her flowers. She loved decorating for every season and holiday. She always had a fun project planned for her grandchildren when they would visit. She loved every living creature, nature, and respected everyone. She was a fighter and strong, she survived breast cancer in 2017, and fought liver failure from 2013 until her death. She will be deeply missed by her friends, family, and all who knew her. A celebration of life will take place on a later date. All are welcome to attend and celebrate Terry’s life. In lieu of flowers, please donate to City Union Mission, 1100 East 11th Street, Kansas City, MO 64106 Attn: Bookkeeping.

The family of Teresa "Ms Terry" Coffman created this Life Tributes page to make it easy to share your memories.

Send flowers to the Coffman family.