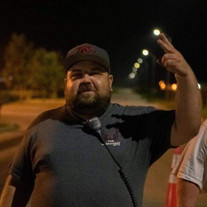 Toby Vitatoe, 41, of Kansas City, Kansas passed away at his home on September 10th, 2021. He was born July 29, 1980 in Merriam, KS. Toby is survived by his Mom, Debbie Vitatoe; brother, Max; dog, WYCO; Uncle, Danny Ladish; Uncle, Bobby (Pam) Ladish; and many cousins. He is also survived by his Grandma, Lucille Palmer (G.G.); Dad, Guy Vitatoe; Uncle, Jim (Johniann) Vitatoe; and Aunt, Mona Hayden (Tony) Salazar; and many cousins. He is preceded in death by his maternal Grandparents, Bob & Shirley Ladish. Toby was a deeply loving and caring man. The bond between his mom and him was very, very close. His love for his little brother, Max, was measureless. Toby would do anything he could for them two. Toby also loved his friends passionately. If you knew Toby, you were his forever friend. He made everyone feel like family. He loved family time, celebrating birthdays, holidays or just being around friends and family. Toby greatly enjoyed music, cruising around, and burning. He played youth baseball with his dad as his coach. He competitively raced R/C cars and avidly built model cars for years. He graduated from Shawnee Mission Northwest. His Mom & Dad started his passion for the love of cars/drag racing very young. He was gifted, at his 1st birthday, his beloved ’67 Chevy II, which he still has today. From the age of at least 3, his knowledge of cars was amazing. He knew makes, models, and how fast they could go. His parents were hotrod enthusiasts, attending many car events. As an adult his passion for street racing grew which led to him co-founding WYCO RACING, an organization that promotes street racing. They held two events at Kansas Speedway, Operation Octane and Operation Outlaw, drag racing on pit road. They’ve also held hundreds of races in KC/Nationwide. Toby organized the most epic/largest illegal small tire street race in America, hosting 43 racers from 15 states lasting two days. One of Toby’s many roles was starting the races by banging the flashlight. Toby was a LEGEND who ran/owned the streets of Kansas City! A visitation will be held from 12-2pm on Monday, September 20, 2021 at Maple Hill Funeral Home. A funeral service will begin at 2pm. Burial will follow at Maple Hill Cemetery.

The family of Toby Vitatoe created this Life Tributes page to make it easy to share your memories.

Toby Vitatoe, 41, of Kansas City, Kansas passed away at his home...

Send flowers to the Vitatoe family.