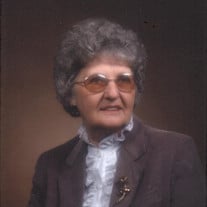 Velma Ruth Spalding at 101 years young, of Shawnee, Kansas passed away Monday, September 7, 2020 at Providence Hospital in Kansas City, Kansas. Ruth was preceded in death by her parents Robert and Velma Typer, her siblings: Ernest, Eldon, Bill, Nina and Vivian; her husband of 50 years, Hubert; daughter Betty Rentschler, son Mark Spalding, grandsons Dustin Howell and Joseph Pound; and great-great grandson Mason Harnden. Ruth is survived by four daughters, Sandra (George) Sutton of Gladstone, Missouri; Janice (Mike) Pound, of Kansas City, Missouri; Barbara (John) Jordan, of Gravois Mills, Missouri; Michelle (Jack) Carmitcheal, of Olathe, Kansas; 14 grandchildren; 26 great- grandchildren; and 4 great-great-grandchildren. She loved all babies and was always thrilled to hear the family was growing so that she could meet and hold the newest baby. Velma Ruth Typer was born in 1919 in Hepler, Kansas, the third of six children born to Robert and Velma Typer. She graduated from Savonburg High School. Both her grade school and high school were in the same building. The school enjoyed big Halloween parties every year and she enjoyed taking part in the Halloween pranks. Her class celebrated graduation with a Potluck on the last day of school. One of Ruth’s first jobs was at a Oil Refinery in El Dorado, Kansas. She also worked in Las Vegas at a factory as a Rosy the Riveter type. Ruth and her first husband, Harry Taylor, now deceased, adopted her sister Vivian’s baby Betty Jeanne in 1945 as It was important to them to keep Betty Jeanne in the family. Ruth and Harry later divorced, and in 1955 she married Hubert Spalding in a civil ceremony. Hubert had been married before, and had three young children, Sandra, born in 1948, Mark, born in 1950, and Janice, born in 1951. In 1958 Ruth joined the Catholic Church, and she and Hubert were married again at St. John the Evangelist Church, located in the Argentine District of Kansas City, Kansas. The marriage of Hubert and Ruth grew to include two children of their own, Barbara, born in 1957, and Michelle in 1958. To help supplement the family income, Ruth worked as a waitress at several restaurants in the Kansas City area, such as the Trail House on the Plaza, and the Majestic Restaurant at its original location on 31st Street. She later became an Avon representative and also a distributor for the Amway Corporation. Ruth managed the snack bar for several years at the Mission Bowl in Mission, Kansas. She and Hubert bowled in many leagues and Ruth had a lot of trophies to show for her high average. Ruth enjoyed crocheting, sewing and knitting, many family members have her 'made with love' mementos to cherish. She made most of her daughter's clothes and even some of her own. Ruth was very active in the Parent Teacher Organization and Camp Fire when her daughters were in Grade School. Upon Hubert’s retirement in 1976, he and Ruth bought the first of their “mini” campers, and enjoyed traveling to several states and even Canada camping and fishing. They would occasionally invite some of the grandchildren to go with them. They also enjoyed managing the snack bar at the Sun and Surf Swim Club in Shawnee, Kansas, for several years where everyone knew her as Ruthie. In 1999, Ruth and Hubert sold their home in Argentine, and moved to an apartment at Crosslines, a retirement community in Argentine. Ruth lived alone there after Hubert’s death in 2006, and in 2015, moved to Sharon Lane Health Facility in Shawnee, Kansas. In Ruth’s 101 years she saw the end of WW1, Prohibition, Women’s Suffrage, Spanish Flu, Public Radio, Transatlantic Flight, The Great Depression, The invention of the car, airplane and Penicillin. Was among the first to hear Jazz. Experience WW11, the threat of Communism, Civil Rights, desegregation, the Assassination of JF Kennedy, the Vietnam War, Watergate, Woodstock, the Billy Graham crusades and the Iranian Hostage Crisis, Ruth witnessed the First Female Governor, Computers, AOL, Email and the attack on the World Trade Center. She witnessed the first Black President of the United States be elected to office and Covid-19 (which she survived!) As you can see she lived a good and full life. She loved well and was well loved, we will miss her sass and her feisty self! There will be a private family service. In lieu of flowers, the family requests donations be made to Veterans of Foreign Wars or the Alzheimer’s Association. The services will be live streamed on Maple Hill Funeral Home Facebook page, 11 AM Monday.

The family of Velma Ruth Spalding created this Life Tributes page to make it easy to share your memories.

Send flowers to the Spalding family.