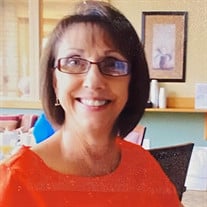 Vicki Lynn Enderle, 70, of Bolivar, MO passed away Wednesday, March 24, 2021 at Research Medical Center in Kansas City, MO. She was born July 8, 1950 in Kansas City, Kansas the daughter of David and Sara Woolery. Vicki grew up in Kansas City, Kansas and attended Rosedale High School from ‘62-’68 where she met and married her first husband of 44 years Larry Mercer from 1968 - 2012. In 1972, Vicki found Christ in her life at Open Door Baptist Church and built her strong Christian faith. After marriage, Vicki moved to Overland Park, KS where she attended Hays Cosmetology school in Mission, KS and worked in a salon for a few years after graduating before opening her own Beauty Salon named “Vicki’s Klassy Kuts” in her home and raised her three children with Larry. She loved singing in the choir at church and taking vacations with her husband and church friends in Branson, MO. She loved to cook for her family and gather around the dinner table. One of her favorite things to do was decorate the house during Christmas Time. She also loved to keep the house clean while listening to music and dancing with her children. Vicki loved to take care of her family and friends, and would give the shirt off her back for even a stranger in need. Another of her joys in life was to spend time with grandchildren, just as long as they were together. From watching them play sports to playing guitar to just playing games and doing puzzles. Vicki always strived to have a smile on her face and spread that happiness to anyone she was near. Her sense of humor could take away anybody’s bad mood or sadness and make them laugh and smile. Anyone who has ever befriended her was proud and honored to know her. Vicki always had a love for animals, especially little dogs which she owned many. In 1986, Vicki and family moved to Lenexa, KS where she began working at Hair Port in Overland Park, KS before transitioning to Lakeview Village in Lenexa, KS as a resident beautician until retiring. Her resident customers would all attest to her kindness and love she emanated. Later in life, Vicki met Jim Enderle at Lakeview Village and they were joined in marriage on April 25, 2014. Soon after retirement they both moved to Paola, KS for a short time before relocating to Pomme De Terre Lake, MO. Vicki loved to sit on her porch and watch the hummingbirds, make ceramics, sew, and scrapbook. Vicki is preceded in death by her parents, David and Sara Woolery; sisters Betty Austin and Bonnie Conaty, brother Bud Woolery and wife Joline, and grandchild Zachary Rhodes. Vicki is survived by her husband Jim Enderle; three children Shannon, Jason, Jon and wife Rhonda, and ex-husband Larry Mercer; sisters Patty McCall, Shirley Gibson; grandchildren Joshua Rhodes, Jacob Fry, Keira Mercer, brother in law Jim Conaty; stepchildren Scott, Lorie with husband Jack, Jeff, and Jenny with husband Will; step grandchildren, Austin, Hayes, Jaylen, Vincent, and Wyatt; two sisters, and many nieces, nephews, and great friends. Her life made her wonderful, God made her an angel. The family will hold a celebration of life for Vicki at a later date.

The family of Vicki Lynn Enderle created this Life Tributes page to make it easy to share your memories.

Send flowers to the Enderle family.