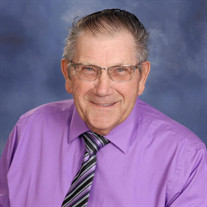 William Ray Bremenkamp, 79, of Kansas City, Kansas went to be with the Lord Thursday, September 2, 2021. He was born on December 22, 1941 in Emporia, Kansas. He proudly served his country in the United States Air Force. Bill met Eunice, impromptu. He was gritty after a long weekend of hunting and she still had curlers in her hair, but they were smitten! Three months later they were engaged and on June 3, 1967 were united in Holy Matrimony. Together they happily raised two children and eventually became grandparents and great grandparents. Bill worked until retirement on the Santa Fe Railroad as a Machinist. He was a member of Our Lady of Unity Catholic Parish. Bill is survived by his wife of 54 years, Eunice; two children, Mary L. Follin and William J. Bremenkamp; son in law, Terry Follin; grandchildren Michaela (Samuel) Turntine, and McKinley Follin; and great granddaughter Maeve Turntine. He's also survived by many dearly loved cousins, nieces and nephews. He is preceded in death by his parents George and Dora Bremenkamp and a brother George L. Bremenkamp. Bill gladly served in his Christian vocation, making hard work seem like child’s play. Mechanically minded, he enjoyed woodworking, inventing, drawing, building, and repairing. He was always willing to lend a helping hand and found it important to pass along his knowledge and skills to the next generation. Bill had a passion for all things planes, trains and automobiles. An animal enthusiast, he and Eunice enjoyed traveling and exploring God’s creation. Those who knew Bill personally, or through the affections of his family and friends, have undoubtedly their own fond stories to remember him by. Foundational to all of the things we loved about him, was his steadfast faith in Christ the Crucified. Precious in the sight of the Lord is the death of His saints. Bill has entered joy and glory; we look forward to being reunited with him in life everlasting! A visitation will be held from 1:00-2:00 PM with Funeral Services beginning at 2:00 PM Tuesday September 7, 2021 at Maple Hill Funeral Home. Burial will follow at the Maple Hill Cemetery.

William Ray Bremenkamp, 79, of Kansas City, Kansas went to be with the Lord Thursday, September 2, 2021. He was born on December 22, 1941 in Emporia, Kansas. He proudly served his country in the United States Air Force. Bill met Eunice,... View Obituary & Service Information

The family of William Ray Bremenkamp created this Life Tributes page to make it easy to share your memories.

William Ray Bremenkamp, 79, of Kansas City, Kansas went to be...

Send flowers to the Bremenkamp family.