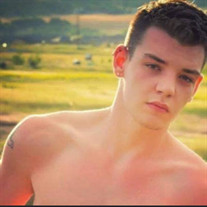 William “Billy” Joseph Howard (Kennedy), 25, of Kansas City, Missouri passed away March 28, 2020 at his home. He was born January 6, 1995 in Kansas City, Kansas the son of Mandy Howard and Billy Thomas. On Sept. 8, 2018 he was united in marriage in Kansas City to his husband, Dyllon Kennedy. He was an adult model known as Ryan Fields. William was a burst of energy and carried that energy with him everywhere he went. He was a loving son, brother, uncle, cousin, friend, boyfriend and husband. He loved spending time with his friends and family, and he always had a way with people. His charisma and witty sense of humor drew others in, and his kind heart of gold made many in his life see him as a “big brother.” He seemed to always have the right words to say, whether that be something goofy to cheer you up, or heartfelt to make you feel understood. William loved to be outside with nature, whether he was fishing or traveling or just hanging out with animals. He loved his pets as if they were any other human in his life. He also took strong interest in art and technology, always wanting to learn something new. Above all, his career in the adult entertainment industry and acting is what made him most proud. William once said, “growing up, everyone wanted to be something else. All I ever wanted to be was a porn star, and I made it!” He also worked as an automotive technician and enjoyed working with cars. William was goofy and spontaneous, and would have loved to be remembered as someone who always brought out the best in others and lit up their lives. He was everything and then some, and he was taken way too soon. He will forever be loved, cherished, and missed. Fly high William. We love you. Including his husband Dyllon, he is survived by his parents and four siblings: Joshua Howard, Laura Burch-Howard, Jessica Burch-Howard, and DeZerea Harmon, as well as his step family. A memorial service will be held at a later date at the Maple Hill Funeral Home. Memorial contributions are suggested to the Family to help with final expenses. Donations for the services can be made directly to Maple Hill by calling 913-831-3345.

The family of William “Billy” Joseph Howard (Kennedy) created this Life Tributes page to make it easy to share your memories.

Send flowers to the Howard family.