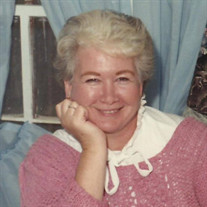 Willodean (Clark) Shannon April 20, 1936 – November 22, 2020 Virginia Willodean Clark Shannon, 84, passed from this life on Sunday, November 22, 2020, in Kansas City, KS. Willodean (Dean) was born April 20, 1936 in Alabama, the eldest child of William Bruce Clark and Addie Lee Nichols Clark. She graduated high school at Cherry Valley, AR. Early in her adult life she married Earnest (Ernie) Shannon of Cherry Valley, AR. and moved to the Kansas City, KS area, where they lived until his death. She continued to live in the same area until her passing. She was the former owner of Coach Lite Club in south Argentine, Kansas Dean was a secretary by trade and spent most of her working life with the Proctor & Gamble Corporation in Kansas City. She has spent the last several years enjoying the company of her many friends in her home area. Dean was preceded in death by her husband, her parents, one brother: Larry Clark, and two sisters: Reba Adams and Rebecca McDaniel. Dean leaves behind three brothers: Nixon Clark of Cherry Valley, AR; Terry Clark and wife Susan of Cherry Valley, AR; and Joseph Clark and wife Shirley of Jonesboro, AR.; and many nieces and nephews. Public funeral service will not be held due to the unusual health risks of this year. Family and friends are asked to visit Maple Hill Funeral Home, Kansas City, KS, at maplehillfuneralhome.com to leave memories of your friendship with Dean. Private burial will take place at Maple Hill Cemetery, Kansas City, KS, beside her husband Ernie, in the care of Maple Hill Funeral Home.

The family of Willodean Shannon created this Life Tributes page to make it easy to share your memories.

Send flowers to the Shannon family.